THE 'SPOMENIKS' OF FORMER YUGOSLAVIA 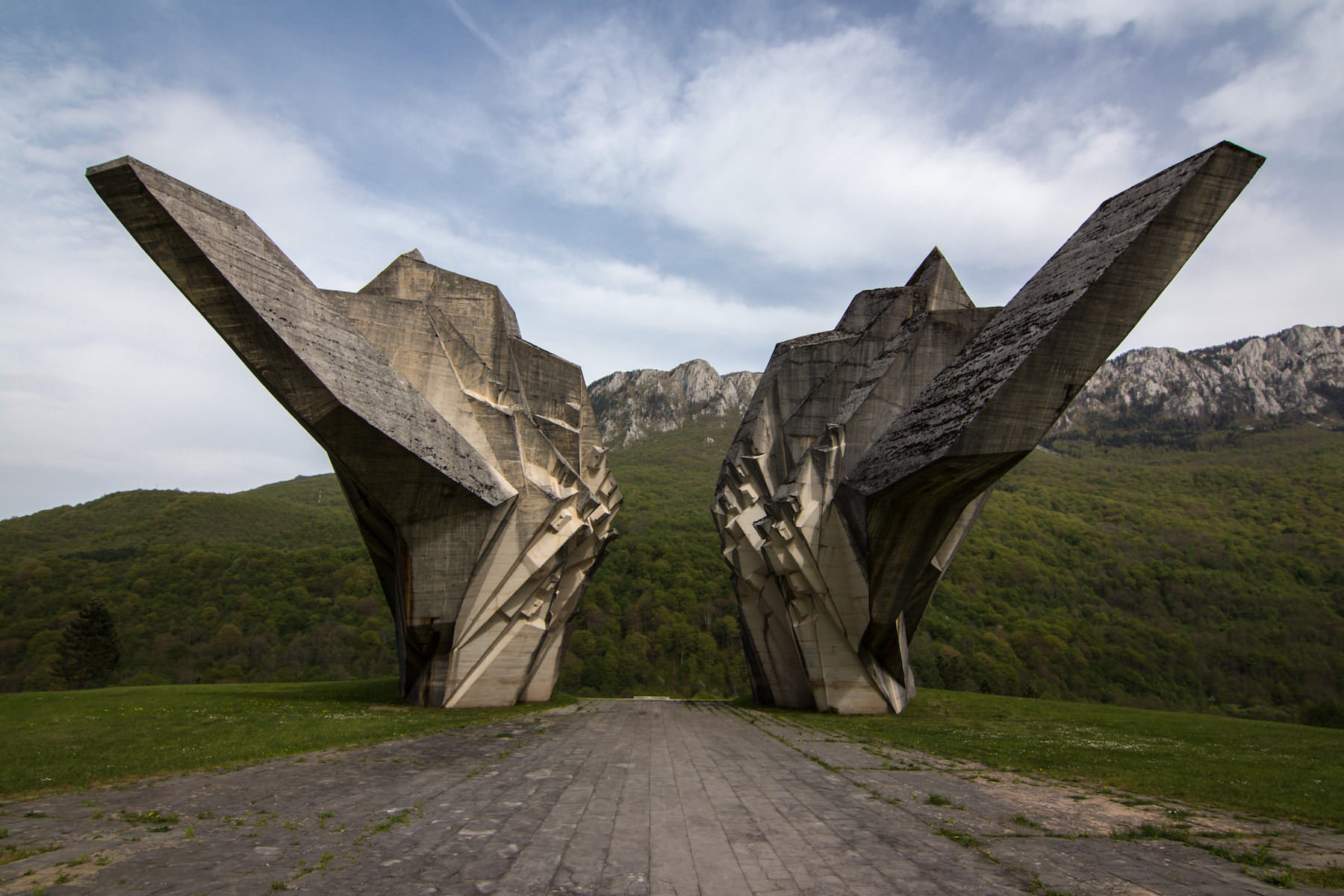 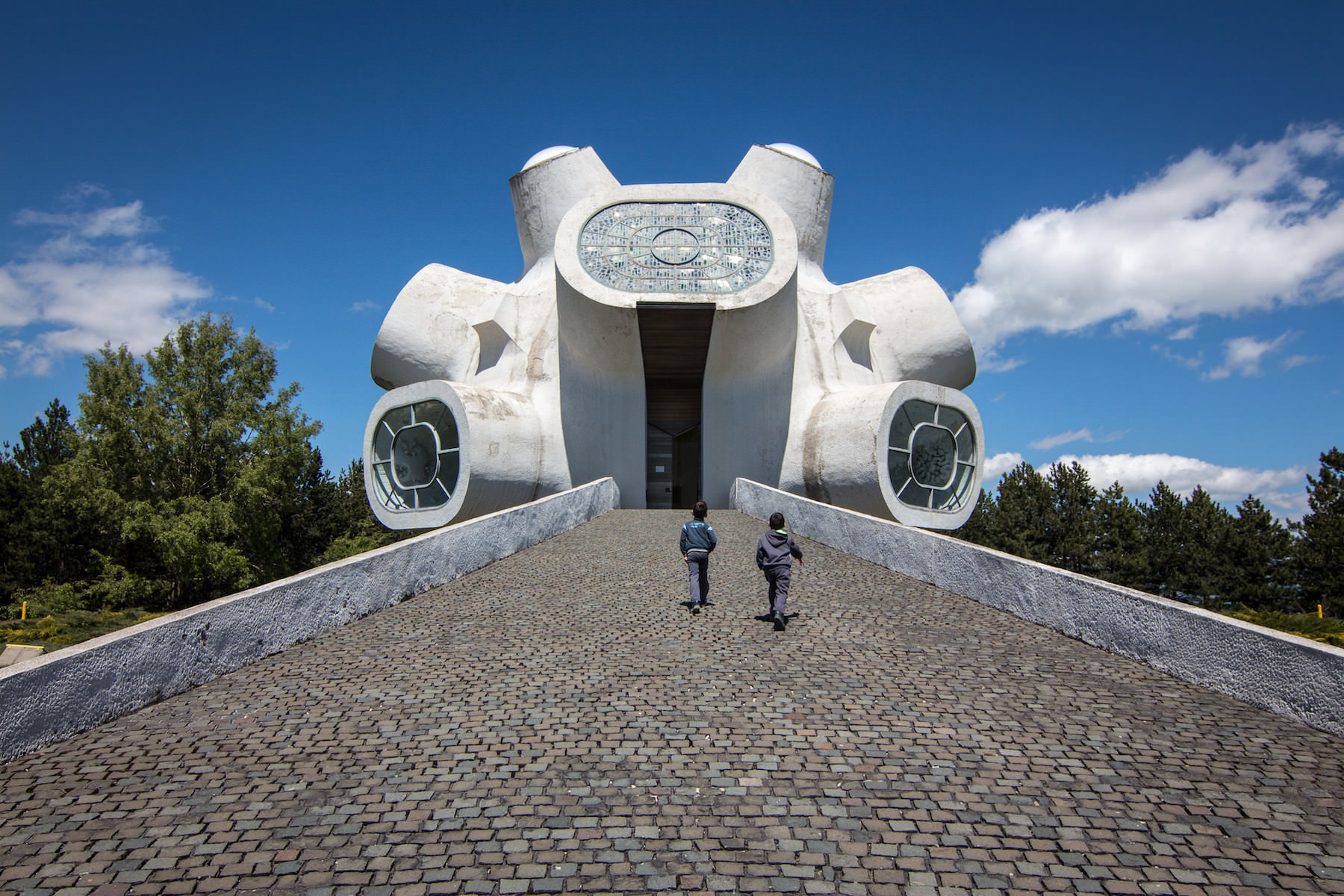 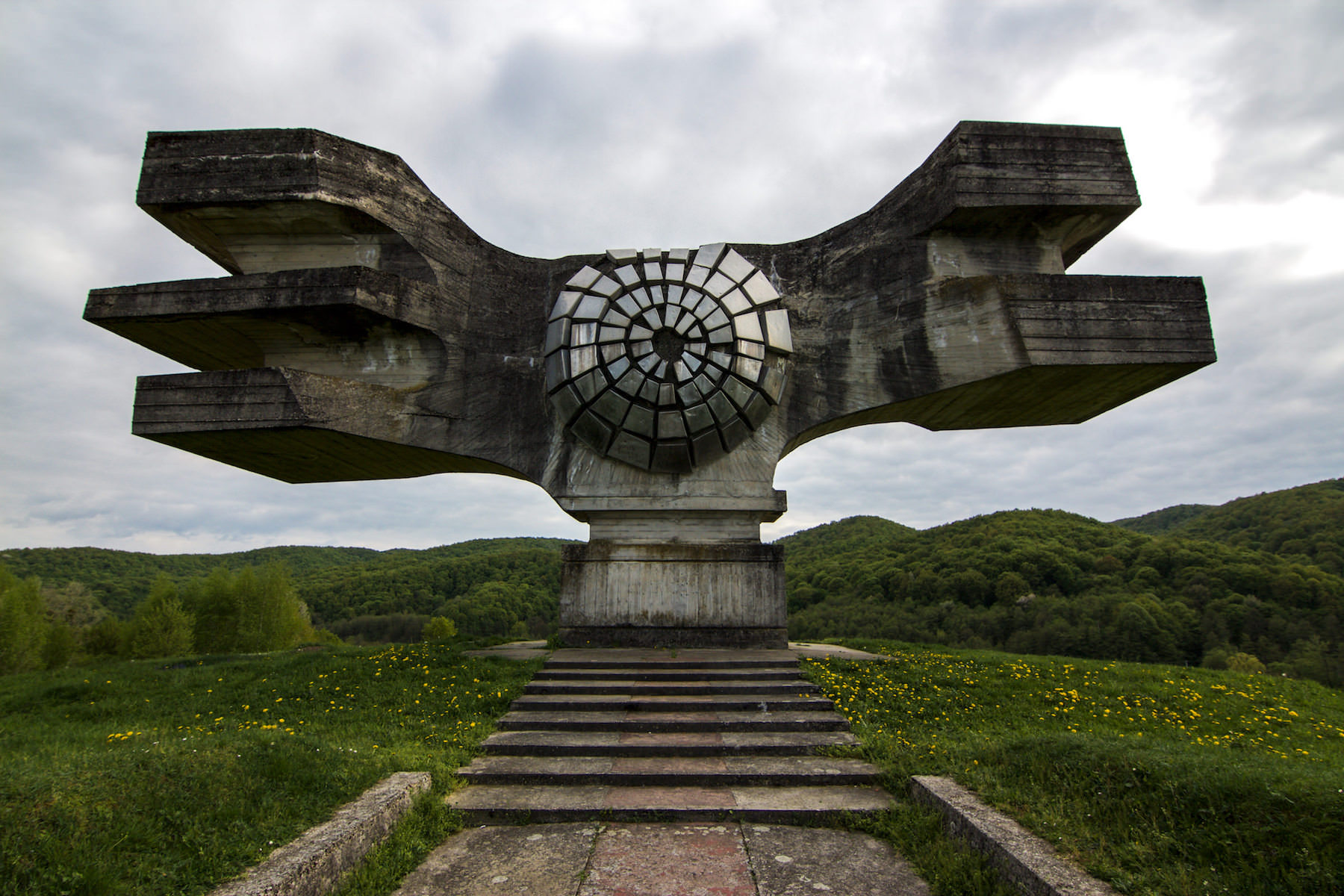 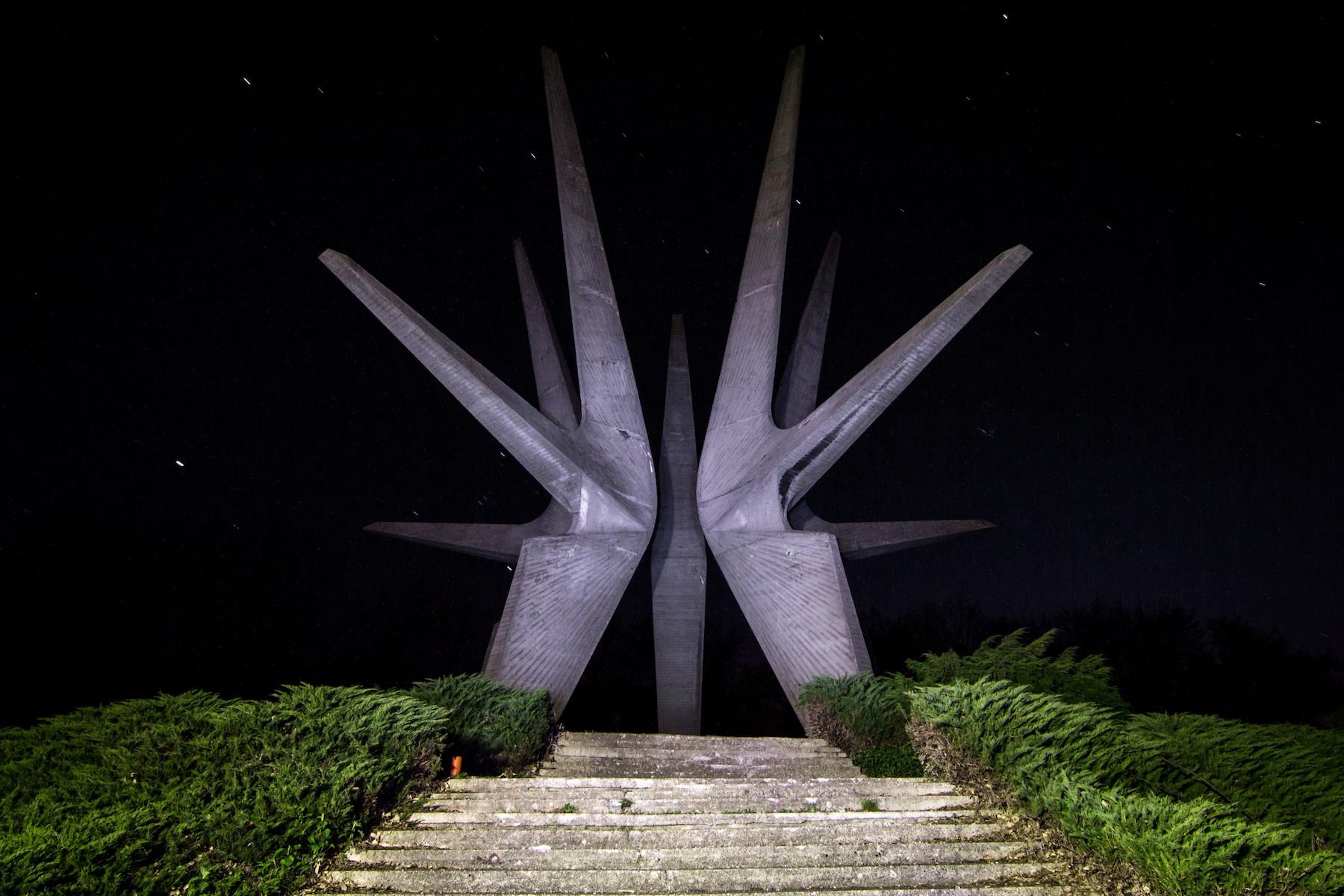 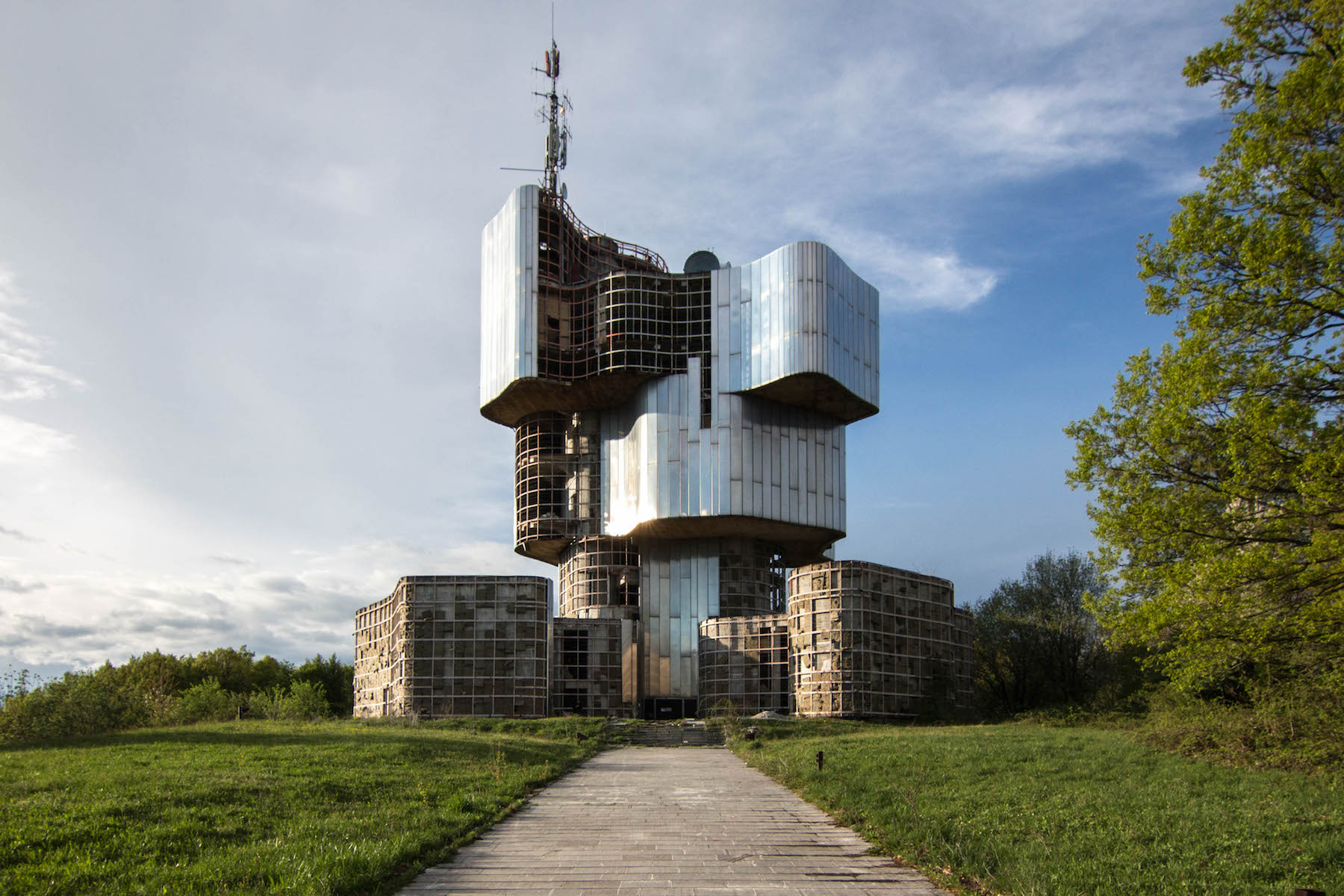 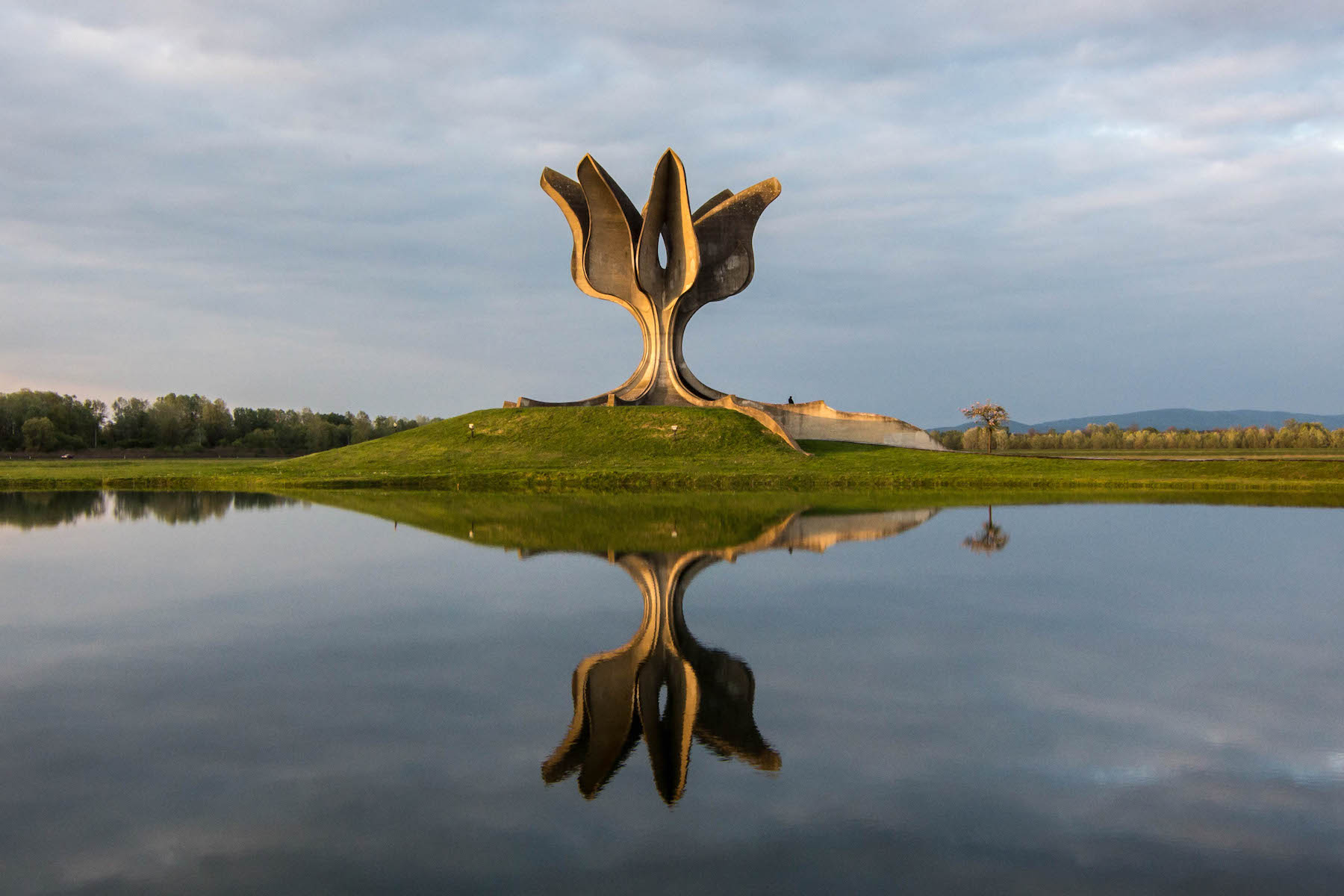 In the decades following WWII, the Socialist Federal Republic of Yugoslavia built a vast number of large and abstract memorials dedicated to the efforts of local anti-fascist partisans. These monuments served the dual purposes of commemorating the heroes and the fallen, but also defining the foundations of a new society. The Soviet Union was then still labouring under forced artistic regulations that promoted rigid socialist-realist memorial styles, but these monuments – abstract and progressive designs reminiscent of rockets and flowers, fists, wings and stars – had the effect of branding the Yugoslav republic as an entirely different sort of state. However, many of these inherently political monuments did not survive the wars that marked the breakup of Yugoslavia in the 1990s... and those that did survive were often left in severe states of disrepair.

Decontextualised photographs of these monuments began spreading around the internet in 2010, when a Belgian photographer published a collection of images that he titled Spomenik – from the Serbo-Croat word for 'monument.' In the spring of 2016, I travelled roughly 5,600 kilometres across the Balkans in an effort to find out more about those monuments that still remained. Over the course of thirty long days, myself and a few co-conspirators explored the nations of former Yugoslavia by train, taxi, plane and boat, on a meandering route that included a total of 14 border crossings. We visited approximately 40 memorial sites as well as interviewing many local people about the histories these objects represented. This research formed the basis of numerous written articles, and the associated photographs saw wide coverage in the international media. Some of my images from the trip were later featured in the 2018 Venice Architecture Biennale.

My findings also refuted two common misconceptions which were then widely popularised in Western narratives about the spomeniks: demonstrating that few of these objects were actually 'abandoned,' but rather that many still served memorial purposes in their communities; and furthermore that these monuments were not all 'commissioned by Tito' in a top-down memorialisation campaign, as many accounts had previously assumed, but rather that a good number of them had been built as the result of regional initiatives with local funding.

Since then, my friend Donald Niebyl has established his own website, Spomenik Database, which documents many of these monuments and their histories in remarkable depth. I highly recommend his site (and its associated book) as a guide for anyone who hopes to recreate a similar trip now. However no such resource was available back when I was planning this expedition, and so my research, beginning in the autumn of 2015, often involved scouring satellite maps for monumental forms, one grid square at a time. It was hard work, but the resultant trip was probably all the more satisfying as a result.

Soon after my 2016 trip, I began developing an educational tourism route through the region. Out of dozens of monuments spread across what is now seven different countries (or six, by Serbia's count), I selected 21 sites, in three countries, connected by what I judged to be the optimal route through the region. I first tested the 12-day itinerary with a group in spring 2017, before launching it the following year as a regular tour offering with Atlas Obscura.

Ex Utopia, September 2016 – Myth & Memory in the Balkans: The ‘Spomeniks’ of Former Yugoslavia