The game worked by superimposing its digital monsters over real world locations. Certain specific locations were given special status in the game – called Gyms or Pokéstops. All geographical data was imported from user-generated maps that the developers had previously used in a different augmented reality game platform. This led to some dubious inclusions, and soon the media was reporting instances of users playing the game in cemeteries, on private land, and even at inappropriate sites such as the Washington DC Holocaust Museum – all of which had been presented to users as playable in-game locations.

A sign at the Holodomor Memorial Museum in Kyiv forbids visitors from catching Pokémon.

For several months in 2016, I took the game with me on the tours I was running – to various communist-era memorial sites, in Bulgaria and the nations of former Yugoslavia. Even sites that had long since been abandoned by their respective governments still often featured as important in-game locations. In a sense, what Pokémon Go had created with its user-submitted data was a psychogeographical map of the terrain; including sites because they felt important to users, and because they were notable landmarks, even in cases where political narratives or official tourism agencies would rather have excluded them.

Finally I took the game on a tour of the Chernobyl Exclusion Zone in Ukraine, and found that even here, in a post-disaster region inhabited by just a small number of re-settlers, Pokémon Go featured multiple in-game locations that were seeing regular interaction from the constant stream of visiting tourists.

In November 2016 I published my full write-up on Ex Utopia: 'Hunting for Pokémon in the Chernobyl Exclusion Zone.' The project got a lot of attention from the press, with features subsequently appearing at the New York Post, Inverse, Slavorum, and others. 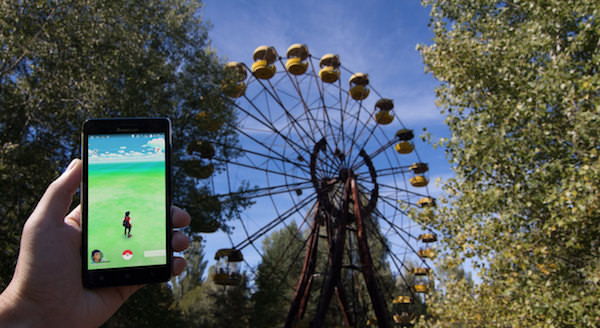 Hunting for Pokémon in the abandoned city of Pripyat.

Later, in the spring of 2019, a new wave of graffiti began appearing around the Chernobyl Exclusion Zone. The pieces featured orange cartoon characters in a variety of situations. One, inside the cooling tower, was dressed in a hazmat suit and bathing in green radioactive gunk. Two figures were painted on boards in front of the Ferris wheel, holding fairground balloons. At the Duga, a character dressed in a gas mask looked on in confusion at a tourist playing Pokémon Go.

Their creator was a French street artist who goes by the name 'Jace.' I managed to track him down on social media – where he was busy defending his work against critics. In a statement he explained how he had avoided painting directly onto significant objects in the Zone, that he had broken nothing, stolen nothing, and that none of his paintings were likely to survive for long there anyway due to his use of naturally degradable paints.

I asked Jace what made him want to paint in Chernobyl. “To bring back some life in the area,” he said. “Some have compared [Chernobyl] to Auschwitz… but for me, it is totally different. The Zone is so huge, and it’s not just a memorial, it’s a living place… there are people still living and working there. The people I spoke to said they felt forgotten, so for them, these fun interventions in the Zone were a breath of fresh air! My idea was always to humanise the place, never to degrade it.” 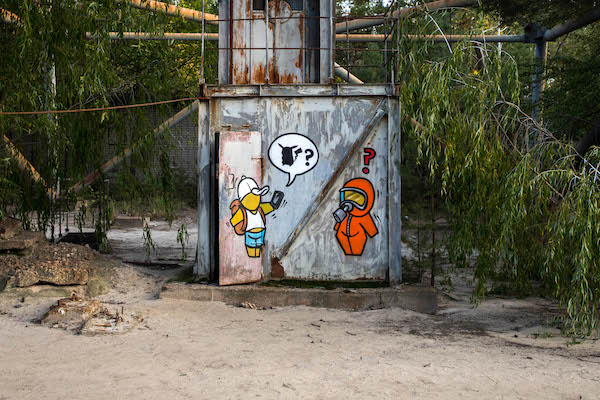 Graffiti at the base of the Duga-1 radar antenna, referencing the game Pokémon Go.

Jace had seen my press coverage about catching Pokémon in Chernobyl, and laughed when he realised the connection. “For me it was a kind of joke,” he said: “A symptom of the modern world invading the old Soviet Zone.” I was left pondering how the process had come full circle: the game had reformed the Zone as a virtual playground, but now, that virtual world had left its own mark on the physical terrain in return.